My Thoughts on Competition by Brandon Scott 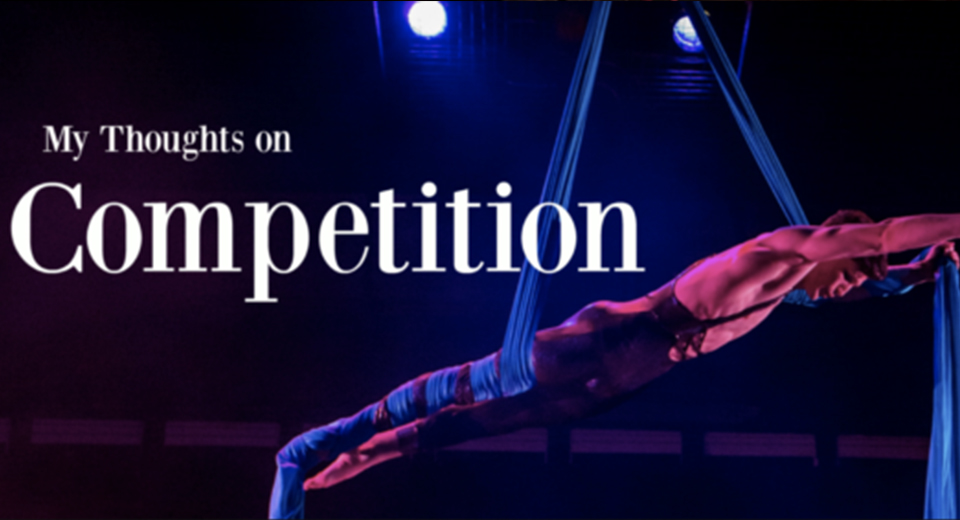 Happy New Year friends and fans! This time of year is my very favorite! I love the opportunity to sit down and reflect on how things have gone in my training and my life and make new projects and goals to work on. However, this hasn’t always been the case…

From ages 10-15, the beginning of the year was the most stressful time for me: competition season. As a gymnast, your year is divided up into Training (May-December) and Competing (January-April), and as each day passed after the New Year, my nerves would rise.

By the time the competition day arrived, I wouldn’t be able to relax enough to eat or sleep, and as a result, I’m sure I never performed at my best. When I finally decided to quit gymnastics, competition was a major reason for doing so. To this day I still have bad dreams about them.

In the last few years though, I’ve had the opportunity to compete as an aerialist, and I had the most enjoyable experiences! So, what’s been the difference? Am I just older and wiser? That may be half true, but I do think I’ve figured out why competing has been so much better at this stage in my life. And just in case you’ve got a competition in your 2019 Resolutions, I want to share it with you.

To be perfectly honest, it really boils down to just one thing:

This may seem like a small change, and it is! But let me break it down a bit further and show you why this paradigm shift really changed my outlook.

Competition is about You, Performance is about Others

When I was competing, I was hyper-focused on myself. Was I going to do ok? Would the judges think I was good? Would I stick my landing? How was I going to place? How many metals would I get at the end? Would I make Coach Chris and my family proud? The more I thought about myself, the more anxious I became.

When performing, on the other hand, your priority becomes the experience of your audience. How do I communicate my story to them? What movement expresses the emotion I want them to feel? Which tricks will make them the most excited? What music will help me to connect with them the most?

My Silks Coach Darla use to always tell me that my performance was a Gift, and this has always stuck with me. When you were exchanging presents during your holidays, didn’t the reactions of, and memories with your friends and family, mean more to you than the things you got?

If you go into a competition remembering that your performance is a gift, and making your audience’s experience of that gift your priority, I promise your anxiety will lift and float into the air, just as you will.

(Speaking of the audience, the one you’ll have at a competition is unique in that it will very likely include other aerialists. I love performing for other aerialists because they have a much better eye for how hard you are working, what your truly impressive tricks and techniques are, and won’t just clap for splits like when performing for muggles!)

Competition is Conflict, Performance is Collaboration

In my first experience with US Aerial in 2015, it was a competition. I retreated into my own world for the duration. I didn’t know my competitors, Trevor Kafka and Nico Maffey, and didn’t make a effort to get to know either of them, or the aerialists in other divisions either. I was was there to compete, and just like when I was a gymnast, when I messed up in the execution of my solo, I was genuinely upset (with myself and the circumstances) that I didn’t win.

This is the mindset of someone in fear, scarcity, and conflict. And it isn’t the way I’d naturally behave in a performance setting. At a gig, being better than the other artists is not the goal. Neither is impressing those specifically there to judge you. In a performance, there is camaraderie between performers (and technicians), and by connecting, working together, and encouraging each other, you cumulatively provide the best entertainment possible for those watching.

This is why the 2016 US Aerial Championship was so much better for me, performance wise and emotionally: I was friends with all the other boys in my division (shout out to Iram, Garret, Troy, Jason, and Joe!) and I genuinely wanted them to succeed and perform their best. I also wanted perform my best, but having grown as an acrobat and as a human in the year prior, that desire came from a place of passion for performing, instead of wanting to win.

Competition is an Achievement, Performance is an Opportunity

As a gymnast, competitions occured at the beginning of the year, but they represented the end of my year. A year of focus, discipline, and hard work sure, but still a culmination of that work. Gold-, Silver-, and Copper-colored metals may have come after the finishing my last event, but I was still finished. And whether that achievement was publicly recognized or not, the pressure of the finale, and starting the cycle over again, was there.

This isn’t necessarily a bad thing. A competition is a great way to set and complete goals, and with deadline for yourself: “I’ve got to have my music chosen and sent in by Friday, Choreography needs to be finished a week after that, and for the next two weeks I’ll be doing run-throughs every other day to build up my stamina, and start practising in costume ASAP to troubleshoot issues.” The pressure can increase focus and productivity, and a time-crunch can spark creativity when nothing else will. But for me personally, I enjoy every facet of competition more when I recognize that it is a part of my journey, not the destination.

While a competition may show you’ve grown, a performance is just another way to grow. And like an audition, what the performance leads to in the future can often be just as exciting as being on stage now. Sure getting payment for a gig feels good, but far more rewarding is the spectator who gives the tale of how touched they were by your performance, along with their business-card and an offer to work their next event. If you go into a competition with this mindset, ironically you’ll probably end up placing higher than you otherwise would have.

If I could go back in time and give my younger-self advice, I’d say “Be a dancer instead”. Just kidding! I’m truly grateful for my history, and I wouldn’t change a thing. However, I would tell teen Brandon to view his meets as a performance, and not a competition. Because in reality, the metals and the plaques and the trophies wouldn’t be nearly as valuable as the opportunity to share his talents and passion with other people.