Acts VS Ambiance by Brandon Scott 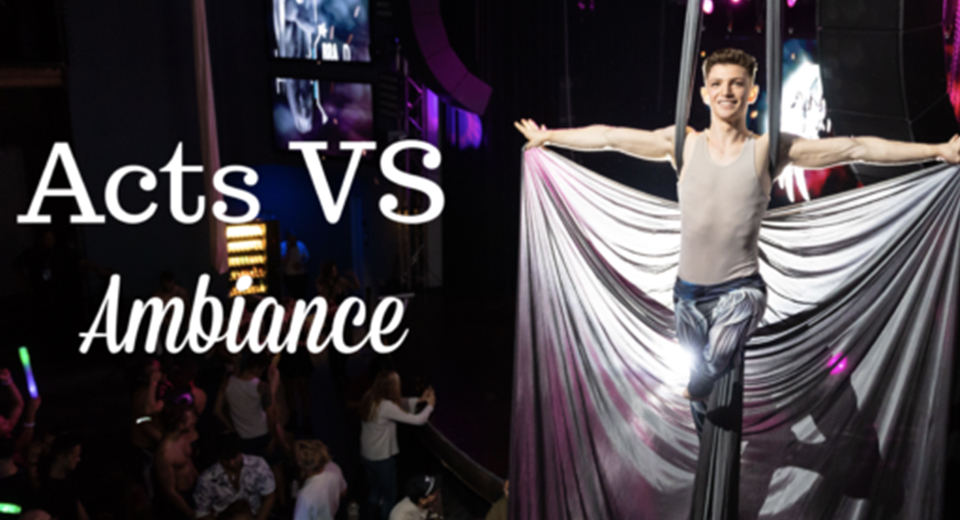 With awe-inspiring feats of strength and flexibility, Aerial Performance inevitably leaves those who witness it live with lasting memories of the experience. For this impact, an increasing number of organizers are incorporating Aerial into their shows and parties. However, not all performances are the same, and Aerial tends to fall into 2 categories: Acts and Ambiance. Whether you are an aerialist yourself, or looking to hire an aerialist for you next event, it’s important to know the differences between the two.

This is probably what you think of first when you hear “aerial performance”.

An Act is a single routine rehearsed with pre-selected music, choreography, and character. Generally it will fall between 4-6 minutes long, and include high-level acrobatics.

As part of an event, an Act is the center of attention to its audience. You can most easily visualize this as what is performed on stage in front of a seated audience.

However, Acts can also be interjected in corporate functions, parties, and other events! An Act in this setting shouldn’t be overshadowed with, or compete with other activities, but instead keep the attendees’ undivided focus (perhaps while other transitions happen elsewhere).

Because of these factors, an Act will almost certainly need preparatory rehearsals, both for the Aerialist to get choreography set to music, as well as for production cues to be set for bringing out the apparatus, beginning music, lighting, and other technical elements.

The other wing an aerial performer uses to fly is Ambiance, or Atmosphere work.

Often, an aerialist will do multiple sets of Ambiance at a single event, with these performances being longer (between 10-30 minutes “on” with breaks between sets), and focusing on beautiful shapes, poses, and interactions with guests. The endurance needed to sustain such long sets means high-level acrobatic tricks are less likely to be utilized.

As the name suggests, Ambiance is used to create more of a feeling at an event, rather than a single exciting moment. While the aerialist is up, they will move in a more improvised fashion to whatever music is playing. Guests are free to watch them as much or as little as they choose, while being free to engage in other activities like eating dinner, networking, or dancing.

Before the event itself, is possible that no rehearsals are needed at all in the space. Preparation will still be needed on the production side in terms of rigging and transitions, but much less so than for an Act. However, the aerialist must be in top shape in order to perform sets of such length, and will be working hard to prepare their body for such exertion.